Posted on July 5, 2012 by Michael Cartwright 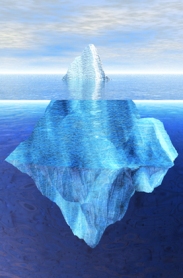 I referred to “on the surface”, because that is what many of us react to, and this does not account for what lies beneath. If a ships captain navigates an iceberg based on what he sees, rather than the majority mass below, he places his life and the lives of others in extreme danger. And, I believe we follow a similar peril by reacting to the surface conditions that we are permitted to witness without accounting for what we are unable to see.

God Himself allowed His own Son to be killed. Not just killed, but spit on, mocked, tortured and ultimately crucified, which in itself was one of the most inhumane, cruel rituals to bring on a persons last breath. We learn this through Mark’s account in chapter fifteen:

19Again and again they struck him on the head with a staff and spit on him. Falling on their knees, they paid homage to him. 20And when they had mocked him, they took off the purple robe and put his own clothes on him. Then they led him out to crucify him. (Mark 15:19-20)

It was never in God’s plan to rescue Jesus from this event. There was life beneath the surface that had to be exposed to bring upon the saving grace offered to man.  Even those closest to Jesus were not awarded the truth of this event until three days later and the masses would not understand for many more. In truth, what existed below the surface is still being brought to life in new believers even to this day.

So as we go forward and witness tragedies and misgivings, we must not blame God for His allowance of such things. We must be patient as we confide in Him to help bring purpose and understanding to the surface from the depths below.

God Bless You and Give You Grace!

Follower of Christ Jesus! I am a person of patience, compassion and understanding. I have been married to my wonderful wife Stephanie since 1990. We have 3 children Dalton, Dylan and my late daughter Angelica (My Angel Girl) who ascended to the heavens on June 29, 2010. She continues to teach me many great lessons.
View all posts by Michael Cartwright →
This entry was posted in Christian Faith and tagged Adversity, Blame, Crucified, Faith, God, grief, Jesus. Bookmark the permalink.

8 Responses to The Surface Below…